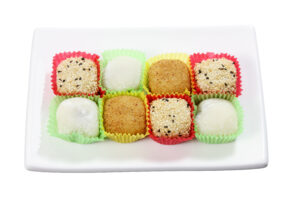 In many Japanese American homes and communities, a yearly custom is the mochitsuki (pronounced mo-chee-tsu-key) – the pounding of mochi, or rice cakes, which is an important part of the Oshogatsu or New Year’s celebration.

Mochitsuki begins with the washing and soaking of the mochigome (sweet rice). The next morning the rice is ready to be steamed in the seiro – wooden steaming frames. Three or four frames are stacked on top of each other and placed over a kettle of boiling water. 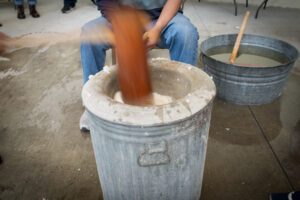 After the rice is cooked, it is dumped into a large bowl. The hot rice is then hit with a wooden mallet until it is a smooth and shiny blob. Someone quickly puts his or her hand into the bowl and turns the rice before the next pound of the mallet.

The smooth and gooey stuff – now called mochi – is put on a table. A person pinches off small portions of the steaming hot mochi for others, who quickly form them into flattened round shapes with their hands. The mochi is then set aside to cool and is ready to eat.